Feel the wind and blessings of Seto Inland Sea...
Maybe their first time here, but many feel something nostalgic somewhere.

The Kasaoka Islands are situated off Kasaoka City on the southwest corner of Okayama Prefecture. They are made up of a total of 31 islands large and small in the center of the Seto Inland Sea. Of these, 7 are inhabited, specifically Taka-shima Island, Shiraishi-jima Island, Kitagi-shima Island, Manabe-shima Island, Ohbi-shima Island, Kobi-shima Island, and Mu-shima Island. The total number of residents can range from 1,000 down to just 100. The principle industries include quarrying, fishing, and sightseeing, and each island has its own unique features and characteristics.
The many of the islands in the Seto Inland Sea are connected by any bridges, but not a single one connects any of the Kasaoka Islands, which truly have natural conditions and climates of isolated islands. They are filled with a calm, peace of mind. One cannot help but to think that there must still be many important things what have been forgotten at some time in the past.
The various islands can be reached with regular passenger vessels and high-speed ships sailing from Sumiyoshi Port. In addition, many ferries depart from Fushigoe Port to Shiraishi-jima Island and Kitagi-shima Island and can carry cars and bikes.

Introduction to the Island 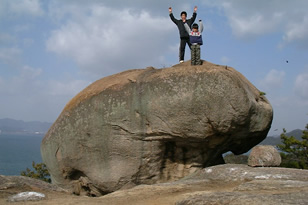 “The Island of Fishermen and Azaleas”

Located 12 km offshore of Kasaoka Port in Kasaoka City, in the northernmost reach of the Kasaoka Islands, Taka-shima Island is said to have prospered since long ago as a strategic point in the sailing routes through the Seto Inland Sea. It is written in the “Records of “Ancient Matters of Japan (Kojiki)” that a temporary lodging (Taka-shima Angu) was built on the island to accommodate the Imperial visit of Emperor Jimmu was on an eastern expedition. 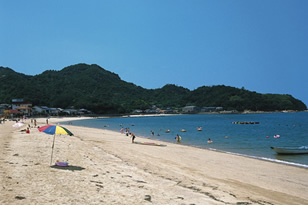 “The Island of Prayers and Marine Sports”

Approximately 10 km in circumference and the second largest of the Kasaoka Islands, Shiraishi-jima Island has been famous for centuries for its picturesque scenery, and has even been designated by the government as a place of scenic beauty.
The Shiraishi Dance performed during the Obon season (mid-August) has been officially designated as an Important Intangible Folk Cultural Property. It is said to have started to mourn for the souls of those who died in the Genji-Heike Mizushima War (1183), and it is considered nationwide as an extremely rare form of Obon dancing. Many sightseers come to the island as part of a tour to observe and even participate in the Shiraishi Dance. 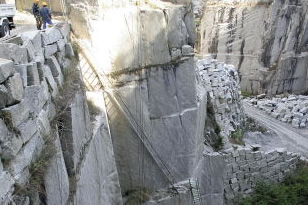 “The Island of Stone and Floating Paper Dolls”

The island produces extremely high quality granite, known as “Kitagi Ishi (Kitagi Stone).” The stone is famous for being used as the stone walls for the Osaka Castle and Fukuyama Castle, as well as the stone for the Jingu Bashi stone bridge at the Meiji Shrine and in the “Torii Gate” at Yasukuni Shrine. Today, quarrying and fishing are the primary industries on the island. 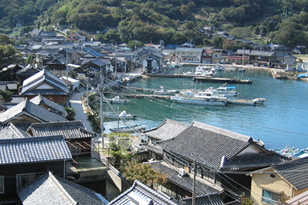 “The Island of History and Movies”

The island is situated roughly 31 km from the Kasaoka Port in Kasaoka City. Its name is thought to mean the island at the edge due south, in other words, the island on the southernmost tip of Bichunokuni Oda County. The characters to write the name were later assigned as phonetic equivalents, not necessarily for their meaning.
The story goes that at the end of the Heian period, the powerful Fujiwara clan used the island as a base of operations for its navy, taking the name for the island from the Manabe clan. In their heyday, they governed all of the islands in the vicinity. There are historical ruins, such as the remains of the castle built by the Manabe family who took the side of the Taira family (Heike) during the battle of the Genji and Heike clans. There is also a stone pagoda built and it is said in memory of the dead. These are just some of the many records, ruins and events steeped in history that still exist on the island, giving Manabe-shima Island more historical prominence than any other in the Kasaoka Islands. 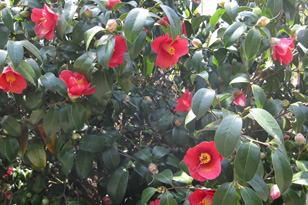 “The Island of Tides and Camellias”

These are islands approximately 30 km from Kasaoka Port in Kasaoka City and are named Hi-shima Islands in conjunction with Ohbi-shima and Kobi-shima Island.
Since long ago, the Kasaoka Islands have held a strategic importance in traveling around the Seto Inland Sea. As part of this, the area around Ohbi-shima Island is considered the location where the east-west tides on the Seto Inland Sea converge and separate. It is believed that ships plying the waters waited in the area for a favorable turn in the tide. 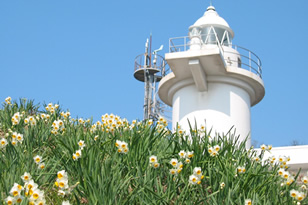 “The Island with the Lighthouse and Daffodils”

Located approximately 40 km from Kasaoka Port in Kasaoka City, the island is the southernmost island of the Kasaoka Islands, as well as that of Okayama Prefecture.
Between it and the Shonai Peninsula Misaki in Kagawa Prefecture about 4.5 km away to the south, there is channel with fast currents, which is a strategically important sea lane for large passenger ships and other vessels crossing the Seto Inland Sea. The first lighthouse in Okayama Prefecture was built on Mu-shima Island to protect ships traveling along the sea lane.