The Island of Stone and Floating Paper Dolls
Rugged quarry remains speak to the history of the island.

The largest of the Kasaoka Islands and with a population of approx. 960 (as of Sept. 2014), the island has come to be known recently as the birthplace of Daigo, one of the members of the popular comedy duo called “Chidori.”

Kitagi-shima Island has prospered producing and processing granite. The “Kitagi Stone” produced in Okayama Prefecture was named because of its birthplace, ranked alongside the “Aji Stone” of Kagawa Prefecture and Ehime Prefecture’s “Oshima Stone” as one of the three famous types of stone coming from the Seto Inland Sea. When the inland roads were still primitive, the granite was delivered by marine transportation. Because of the ability to deliver the high-quality stone within strict deadlines, the granite became widely known not all over the country, but overseas as well. It is said that at one point the Island dominated the industry as one large production area.
As evidence of this, Kitagi Stone was used for the stone walls of the Osaka Castle, rebuilt by the Tokugawa shogunate, as well as in the construction of such well known sites as the former Japan Bank Head Office building, Meiji Shrine, and Yasukuni Shrine. Pressured by the low price of imported stone, production at the quarries has dropped, but with the processing technology Kitagi-shima Island has developed, processing of the imported stone thrives on the island.
In the current Toyoura and Kanafuro Districts, the shaved faces of many mountains are remnants of the extent to which the quarrying industry flourished on the island.

In addition, the Nagashi Bina is an event involving setting afloat on water paper dolls. It dates back as far as 300 years and takes place in the Kitagi-shima Oura District on the Sunday before March 3 of the old calendar. It is an event attesting to religious faith in the female gods of Awashima in Kada, Wakayama Prefecture.
In the Nagashi Bina ceremony, paper dolls are placed into small boats made of wheat straw along with peach blossoms and oblong rice cakes, and then set adrift on the water. It is a ritual to pray for the sound health of woman and dispel impurities and misfortunes. The Suma Scroll (12th handscroll) of The Tale of Genji contains a passage describing how Hikarugenji put a doll that had been exorcised into a boat and set it afloat on the Suma Sea. The original version is said to date back as far as the Heian Period. At one time, the ceremony was held all over the country, but it has almost disappeared in Okayama Prefecture and other places.

Places to See on Kitagi-shima Island 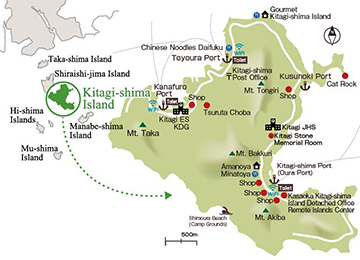 On the side of the port the ferries arrive and depart from (Kanafuro Port and Toyoura Port) are the remains of the quarries, quite a striking sight.
We recommend that you rent a bicycle at Toyoura Port (ferry) or Kitagi-shima Ports (Oura Port) (where the regular passenger vessels arrive and depart from), or bring your own bike, and cycle around the island.
The Nagashi Bina ritual taking place in the Oura District is registered as an Important Intangible Cultural Property of the city. You will definitively want to take the time to observe the event which is steeped in history. 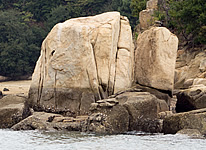 A rock with a sad tale to tell

A rock located at a place called Nunokoshibana, in the eastern corner of the Kitagi-shima Kusunoki District, it is named... 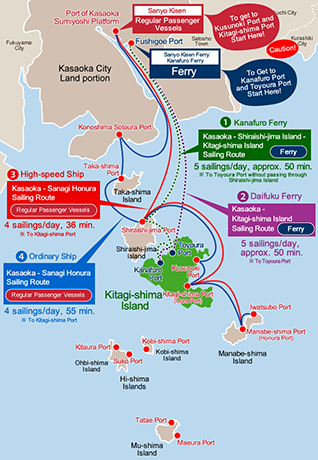 To get to Kitagi-shima Island, use the Daifuku Maru or the Kanafuro Maru Ferries that arrive and depart from Fushigoe Port, or the regular passenger vessels operated by Sanyo Kisen out of Sumiyoshi Port in Kasaoka.
Ferries stop at Toyoura Port and Kanafuro Port on the west side of the island, while regular passenger vessels stop at Kitagi-shima Port on the island’s east side (Oura Port), as well as at Kusunoki Port. There are no means of transportation between the ports on the east and west sides, so do not make a mistake in selecting a vessel to arrive at your intended destination. Also, there are ferries that go only to Shiraishi-jima Island, so again do not board one of these by mistake.
When selecting a regular passenger vessel, board one that takes the Kasaoka - Sanagi Honura sailing route. There are also the ③ high-speed ships and ④ ordinary ships. The high-speed ships do not stop at Kusunoki Port.