An Island of History and Movies
You can walk around leisurely enjoying the fishing village that hasn't changed from long ago.

Situated roughly 31 km from the Kasaoka Port-Sumiyoshi Boarding Dock in Kasaoka City, it is thought that the island’s name means the island at the edge due south, in other words, the island on the southernmost tip of Bichunokuni Oda County. The characters to write the name were later assigned as phonetic equivalents, not necessarily for their meaning.
The story goes that at the end of the Heian period, the powerful Fujiwara clan used the island as a base of operations for its navy, taking the name for the island from the Manabe clan. In their heyday, they governed all of the islands in the vicinity. There are historical ruins, such as the remains of the castle built by the Manabe family who took the side of the Taira family (Heike) during the battle of the Genji and Heike clans. There are also the remains of the two-story Buddhist tower built it is said in memory of the dead. Also remaining is the Sankashu personal collection of poetry composed by the famous poet, Saigyo Houshi. These are just some of the many records, ruins and events steeped in history that still exist on the island, giving Manabe-shima Island more historical prominence than any other in the Kasaoka Islands.
The port contains stone embankments and maintains the appearance of a peaceful fishing village. This has led the prefecture to officially designating it as a “Hometown Village.” Used as the backdrop for the Japanese film, “MacArthur's Children," among other movies, the island’s landscape and scenery lends themselves very effectively to the running portable shrine festival, and other famous events, enticing a large number of sightseers.
In addition, the island is home to many clowders of cats and attracts increasing numbers of tourists who come to enjoying observing them.

Places to See on Manabe-shima Island 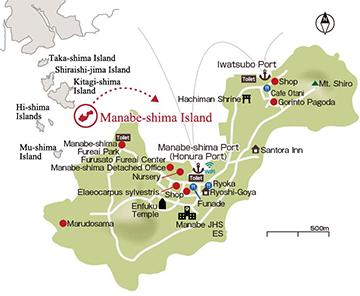 The townscape of Honura with all its charm and elegance and the Manabe-shima Junior High School used as a location in movies must been seen. Known as the “Island of Cats," cat lovers will be enthralled with the island. The main sightseeing spots on the island can be reached on foot.
The running portable shrine festival held in early March is a powerful sight to be seen. If you intend to visit around that time of year, you really should plan your itinerary around the exact time and date. 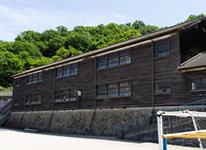 The wooden school buildings for many Japanese bring back fond memories of their past.

The wooden school was built in 1949 and is still in operation today. Many tourists visit because of its nostalgic appearance and it is well... 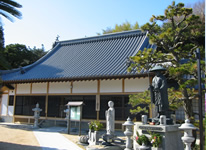 Founded in 795 by the famous monk Kobo Daishi, it is an ancient temple of the Shingon sect of Buddhism and has been preserved with... 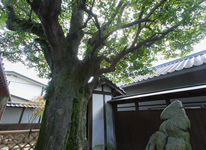 Manabe Residence and the Elaeocarpus Sylvestris

The Large Tree Right Next to the House Lends an Air of History.

The Manabe family prospered during the closing days of the Heian Period as a very powerful clan on the island. The main building is officially... 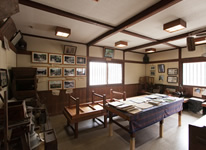 The second floor of the waiting area at the arrival dock at Manabe-shima Port has been made available as a museum and achieves free... 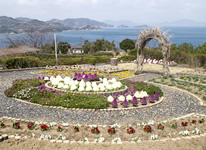 Raising winter chrysanthemums on Manabe-shima Island used to be quite popular and it became known as the “Island of Flowers.”... 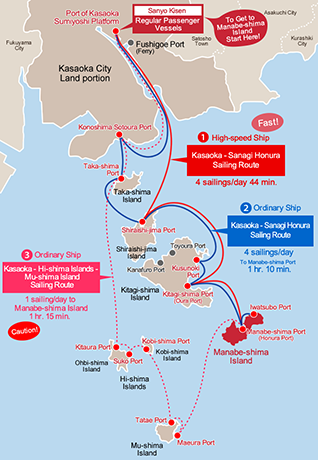 * There is a ferry boarding dock at Fushigoe Port inside Kasaoka Port, but be aware that the ferry goes to Kitagi-shima and Shiraishi-jima Islands. The ferry ports on Kitagi-shima Island (Toyoura Port and Kanafuro Port) are far from the ports for the regular ferries (Kusunoki Port and Kitagi-shima Port) heading to Manabe-shima Island. And there are not means of transportation on the island, be careful not to make any mistakes.