The contrast with the two-arched bridge is beautiful.

It is said that the Sugawara Shrine was built on reclaimed land in the Yoshihama District during the Edo Period to worship the local Shinto god. Its precincts contain approximately 2,000 irises living en masse in the Mitarai pond. During May of every year, the bright bluish purple flowers are a pleasure on the eyes. The contrast between them and the two-arched stone bridge spanning the pond is exquisite. 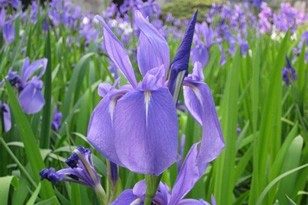 It is said that “Any iris is an iris, but just by a different name.” The particular type of iris grown is known as the “rabbitear iris,” and it closely resembles the “Siberian iris” and the “Japanese iris.” There a different ways to tell them apart. The ones which have a web or mesh-like pattern at the base of the petal are Siberian irises. Those with a yellow pattern are the Japanese irises. The rabbitear iris has a white pattern.
Best time to see: Early to late May 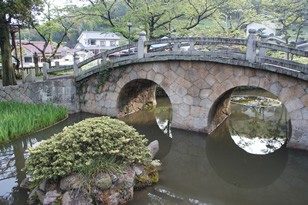 The two-arched stone bridge over the Mitarai pond was built in 1887 by Toyokichi (Toyozo) Sato, the master mason in his local area of Yoshihama-mura. The “full-circle” arches of the stone bridge are a rarity in the entire country and have been designated as an Important Cultural Property by the prefecture.
The bridge is referred to as a “Megane (Eyeglasses) Bridge” in Japanese. When viewed together with their reflections on the water’s surface, the arches appear as “full-circle” arches as opposed to semi-circular arches, making them resemble eyeglasses, or “Megane.”