Overflowing with the history of Kasaoka.

This is a facility established to present even the smallest of items to tickle the visitors intellectual curiosity, and includes important artifacts from religious services unearthed from ruins at Hi-shima Islands.
On display are earthenware and currency dug up from ruins in the city. These include nationally recognized artifacts from the Oshima Tsukumokaizuka shell mounds of the Jomon Period, and southern ruins of Ohbi-shima sandbar which existed from the Nara to Heian Periods. 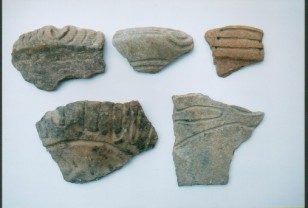 Discovered from the large number of Jomon Period human bones unearthed through excavation studies during the Taisho period, the exhibits include Jomon earthenware dug up from the Tsukumokaizuka shell mounds which appear in textbooks of Japanese history. 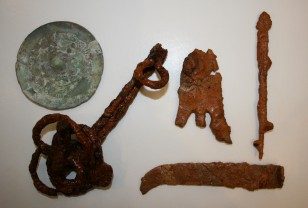 Group of Ancient Burial Mounds in Mountain Behind Chofuku Temple

This group of ancient burial mounds was created in the 5th century. Over 10 of the mounds dot the summit of the mountain. Today, there is a walkway through them known as the “Kasaoka Ancient Hill Sports Park.” 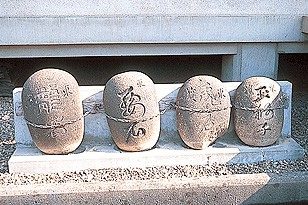 Lifting Stones Lined Up in the Front Garden These are stones used in contests of strength by longshoremen who loaded and unloaded cargo from sailing ships in the Edo Period. The heaviest stone weighs over 200 kg, and all the stones contain the names and years of the longshoremen who were able to lift them.