The island of fishermen and azaleas
excites a spirit of ancient romantic adventure with its ruins steeped in history.

Located 12 km offshore of Kasaoka Port in Kasaoka City, in the northernmost reach of the Kasaoka Islands, Taka-shima Island is said to have prospered since long ago as a strategic point in the sailing routes through the Seto Inland Sea. It is written in the “Records of “Ancient Matters of Japan (Kojiki)” that a temporary lodging (Taka-shima Angu) was built on the island to accommodate the Imperial visit of Emperor Jimmu was on an eastern expedition.

On the south side of the island, there is a path that extends along the ridge of the mountain. Part way up, is an area to offer a 360-degree view of the calm waters of the Seto Inland Sea. In addition, when azaleas which the residents raise with great care are in season, they can be seen en masse in full bloom.

People say that rock quarrying and marine transportation used to thrive in the area. But the increases in guesthouses serving fresh fish caught by the fishermen and the tourists who come to view the scenery have transformed it into an island of sightseeing and fishing.
Also, riding on a trawler for tourists, helping with fixed shore netting, and other opportunities to experience first hand the life of a fisherman have gained popularity recently.

Places to See on Taka-shima Island 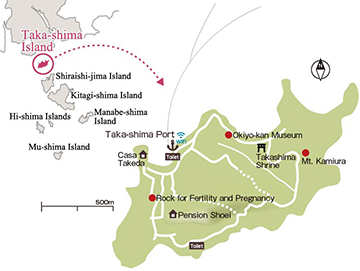 A 2 km path enables visitors to walk right around the island. They can search for historical items, such as the remains of the temporary lodging build for the Imperial visit (Taka-shima Angu) and the “Rock for Fertility and Pregnancy,” to which prayers are offered the positive outcome of all aspects of conceiving a child.
At an inn operated by the local residents, visits can avail themselves of opportunities to experience being a fisherman, such as riding on a trawler. Special benefits are offered to groups who make reservations.
As the season for viewing azaleas arrives in April, the Azalea Festival is held. 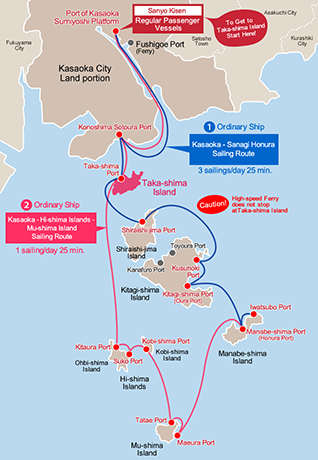 * At Kasaoka, there is a ferry boarding dock at Fushigoe Port in Kasaoka, but be aware that the ferry goes to Kitagi-shima and Shiraishi-jima Islands and does not stop at Taka-shima Island.