A rock with a sad tale to tell

A rock located at a place called Nunokoshibana, in the eastern corner of the Kitagi-shima Kusunoki District, it is named because on one of its sides can be seen the profile of the head of a cat. It is believed that the profile was created quite by chance through the erosion caused by the waves. But according to one legend, a calico cat put into a boat by a general of the Taira family (Heike) during the Genji-Heike Mizushima War (1183) swam with all its might to the rock when the boat sank. Beside it are stones that were prepared but never used in the construction of Osaka Castle. Cat Rock can be seen from the regular passenger vessels pulling into Kusunoki Port. 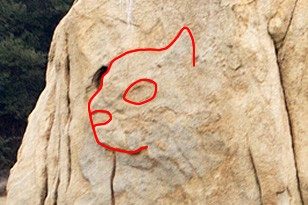 Profile of a Cat’s Head 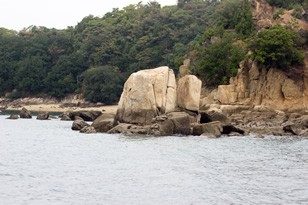 Try to See It From the Ship

The head faces out to the ocean and can only be seen while travel on the water. There is a good opportunity to see it from a regular passenger vessel when it pulls into Kusunoki Port.